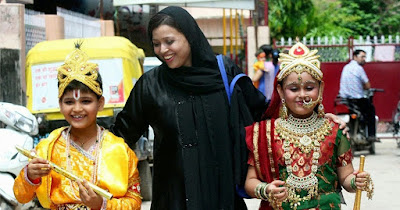 Although it is routine to give references, in the end, I shall start with the list of three reference books in the beginning. All these details are not mine, I’ve only summarized them from these books.

Muslim Statistics:
Islam:
Muslim Rulers in India:
I know you were aware of most of the details I enlisted so far. Let me give names of certain great Urdu shaayars (poets):
The last in this list of lists, I’d like to add names of some of the Muslim freedom-fighters, because then immediately, I am going to ask “WHAT WENT WRONG”?
So, what went wrong in India as regards Hindu-Muslim relations and why?

There are following facts that damaged their look.
Future of Hindu-Muslim Relationship:

Having introduced the Muslims, told about what went wrong, I will conclude the article with this positive note:

India is the best home as was in past for anybody and everybody, be it Muslim or Hindu. (In Hindi, Mohammad Iqbal said “Saare jahan se achchha Hindustan hamara…”.)
All Indians love each other in general, they do not want any quarrel on whatsoever ground be it religion or anything.
Muslims are going to stay in India. Then what is prudent?
To love them and live peacefully with them. (Otherwise?)

In fact, we have to learn from the Union of Europe and plan to make Asia one. In my opinion, the real terrorist is America ready to kill the whole world for selfish motives. We need to fight that, and not one another.


If you ask, what if we do not unite and continue fighting? Then we have to be ready for India-Pakistan war scenario in every village, town or city where two communities are staying separate, but not far away to kill each-other round the clock.

What do you say? I want you to tell me.

Yes, I will explain this phrase as it is, but I want to tell you a story of a particular caste as a preface and that will follow the subject matter.   In a particular intelligent community in South Gujarat, the superiority complex is an inherited and cultivated character amongst each and every member. They consider themselves, and for that matter oneself individually, superior to all others and all around. This means they are 'the best', have all the worldly knowledge, understands all the subjects and are skilled at the highest in all the matters. They believe whatever they say is the final truth, ultimate truth and truth can not be anything otherwise!   This sense of great ego makes each one believe that all others around are inferior to them, and don't have the same level of intelligence to understand anything. To the extent, one considers others idiots and having low intelligence compared to them.   Now, you can understand this superiority complex of everyone in this com
4 comments
Read More

“Facing Challenges and Creating Destiny” by BK Shivani, Gurgaon National Conference on Mind-Body-Medicine, Mount Abu. August 6-10, 2010 What is Karma? Karma is work or energy going out in the form of 1. Thought, 2. Word and/or 3. Action. Resultant return of energy is in the same amount known as Bhagya (Destiny). The role of God is to ask you to do Karma and to help you to do RIGHT karma. Then whatever good/bad karma you do, the result is accordingly and entirely your responsibility. Because the result is Destiny (Bhagya). So don’t blame anyone else or God for anything bad. Do not try to blame someone responsible for your own deed and its result.
15 comments
Read More

A student of History has to understand Geography, Economics and Anthropology simultaneously. A person curious to know about world history has to proceed step by step, learning his own state first, then country and then only one can understand world history. Well, appreciating above facts, I am starting my study with History Of My State Of Gujarat . I have put it in order of time and later described important states and rulers.
7 comments
Read More