February 09, 2018
To my greatest surprise, one fine morning I received a memento with my name inscribed, in the honour of outstanding academic achievements! Turned out that Pardi Education Society's trustees and event organisers (including the Vice President Hemant J. Desai) had sent this memento as part of the centenary celebrations of my high school D.C.O. (1918-2018). This award depicting the story of grand 100-year celebrations inspired me to write about my story with nostalgic emotions and the then D.C.O. High School. Killa Pardi.

Today, I see very intelligent and smart students’ generation coming up, because of the exposure to modern technology of computers and television. In the past, we had to become cleverer and cleverer only by studying in the school, reading books by different authors and the newspapers. While comparing this, I shall narrate school experiences and history of my school – DCO – Dhanjibhai Cawasji Oomrigar High School, Killa Pardi, Gujarat, India!


I do not know much about the present, but during my study period, our school was recognised as one of the best high schools in this area with Shri R. M. Desai (Ranchhodji M. Desai) - a national award winner as the Principal. Students from distant areas of Umarsadi, Haria and Vaghchhipa used to come by bus, bicycle and many staying in the hostel.

You will be surprised to know that the beginning of teaching English as a subject was after Std. VIII. So, English alphabet and numbers were introduced after passing Std. VII. Till then, I was a student of D. S. & B. B. Model Multi-Purpose High School, Khara Abrama studying commerce (out of many streams like technical, drawing, music, agriculture, etc.) to become specialist in accounts! But the universe wanted me to become an eye-specialist instead, as it turned out. So, my father was transferred to Killa Pardi and I was admitted to D.C.O. in Std. VIII-C in the second term. By the way, I have four experiences of changing the school in the middle of the academic year, at - Parujan, Mehmedabad, Khara Abrama and Killa Pardi in Std. IV, V, VII and VIII respectively. It is difficult to adjust in the second term and this is rarely seen nowadays.

When I got the admission, two paradoxical events took place. The son of the English teacher Maganlal B. Naik died by drowning at Haria during Diwali and the Maths teacher Dolatrai D. Naik (our neighbour and relative) became the father of a son. Because his son was born on Friday (Shukravar), he was nicknamed Suku-alias-Mahesh who is 54 years now and a Managing Director of a big organisation in Vapi. 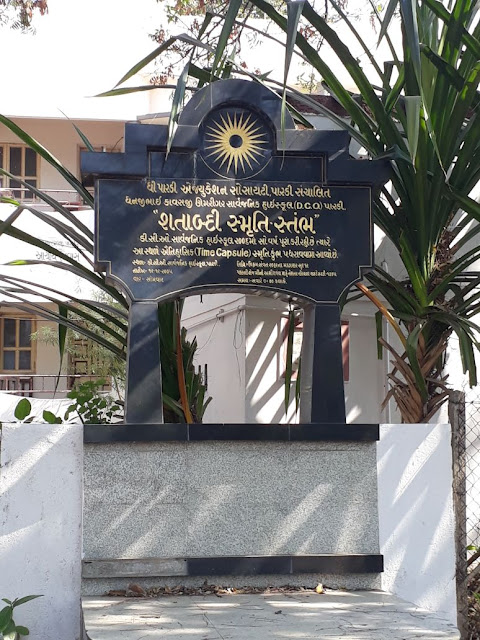 English: Maganlal B. Naik, Chandrakant D. Vaidya, D. T. Agarkar (Vice Principal) and R. M. Desai (Principal) taught me English for four years. Maganlal Naik used to ask us to pronounce the current time and all nine tenses every time he entered the classroom. One day, he asked one of the students, Vasanti Desai, to tell the tense of a sentence which happened to include the name Gopal; she replied wrongly and from that time onwards, she was asked to be known as Gopal. English grammar was taught with great attention because all the “Pathmalas” about the grammar were taught. So, I have a great base in the grammar, but poor English word-power. C. D. Vaidya was a strict, sincere and disciplined teacher of English - he had a great influence on my personality-development and as a mark of respect, I used to send “Pranam” on every “Guru Purnima” till his death. He used to reply every year with blessings and best of his wishes.

Hindi: V. J. Majmudar (our neighbour) used to teach us Hindi. I specifically remember him teaching one word "गोधूलि बेला" meaning 'the time when cattle returned home in the dawn spreading dust all around.' He was impressed and happy with my study. He encouraged me to participate in external Hindi examinations of Gujarat Vidyapith, Ahmedabad and Swadhyya Mandal, Killa Pardi up to stage IV. Interestingly, my twin brother Bhupat went on to do his Master's in Hindi and become a Hindi teacher.

Sanskrit: Madhusudan Joshi (from Utran) and Nandlal Joshi (Bilimora) taught me Sanskrit. Son of Nandlal Joshi Dr Mukesh Joshi is still my friend, so we had continuous contact. He was simpler, straightforward and a good teacher.

Mathematics: Dolatrai D. Naik, B. B. Champaneri and Lalbhai Desai taught us this subject. I got nearly full marks in this subject. Before the sum was dictated with details, I used to do all the calculations in my mind and give the answer orally. In S.S.C., I was the only student in the school opting the elective subject "Special Arithmetic." B. B. Champaneri was the teacher of this only student. I thought, becoming a doctor would alleviate poverty and, in the journey, the cleverness in Maths just got ignored. 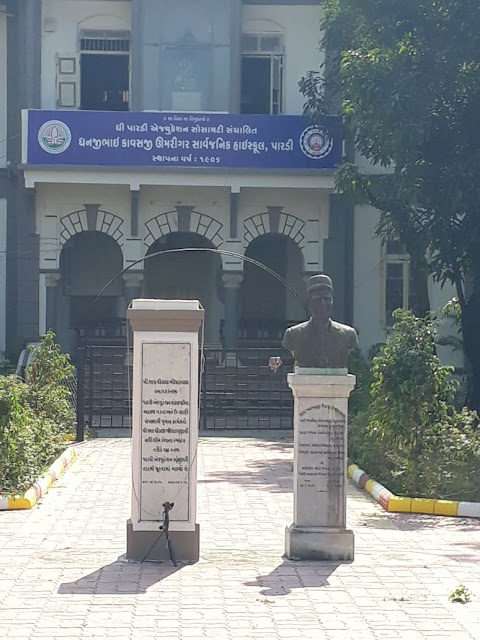 During the high school days, I always got the second rank in the annual exam and Rekha Shah or Pravin K. Mehta would stand first. I do not blame the teachers, but the S.S.C. results ranked me to number one position. From our batch, four students became doctors, Dr P. K. Mehta MBBS, Dr Manjula Modi MBBS, Dr Uttam Prajapati BDS and myself D.O.M.S. and M.S. (Ophthalmology).

Devvrat C. Desai is one of my closest friends of that time who continues to be so till today. We met regularly and talked. He did B.Sc. and B.Ed. to become a teacher at Fansa near Bhilad, Gujarat. I visited his place frequently. His parents were loving and respected me a lot. (Special thanks to Devvrat for sending the most recent photographs of the school.)

Friendship amongst boys and girls was practically non-existent during our school days. Any relationship at all was that of respect and praise from distance!

The high school teachers used to take great care of the students and they were sincere and well-disciplined as far as teaching was concerned. Life before 50 years was simple enough and without modern technology like TV, Computer, Car, Scooter, Air conditioner, Mobile phones and Cameras. So deviations like Whatsapp, Facebook, Mobile talks, Sports and other programmes on TV were absent. Killa Pardi was a small town spreading between Damani Zampa to Valsadi Zampa and Chival Road to the Railway Station. People went to bed at around 8 p.m. to get up at 5 a.m. So, I think a study was the only work students had and indiscipline among students was nearly absent. 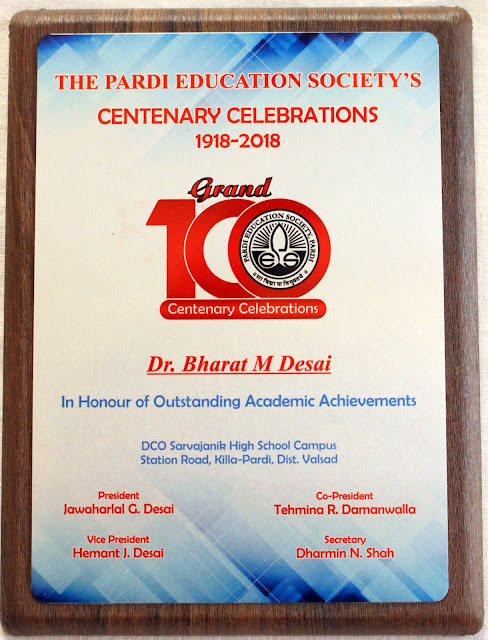 It is the childhood memories of the high school days that lives with all of us during full life - the teachers, the friends and supporting relatives. They are always with you till the death as they are innocent, honest and loving pleasing. I am full of emotions of gratitude, respect and praise for my teachers and co-students of D.C.O. High School, Killa Pardi and no words are enough to praise this period (1963 - 1967).