Every third person in the world is Christian. Meaning thereby, the highest number of people of any religion are Christians. So it is quite possible, you are dealing more often with a Christian than you think. With this in mind, here is a gentle effort to introduce the said religion. 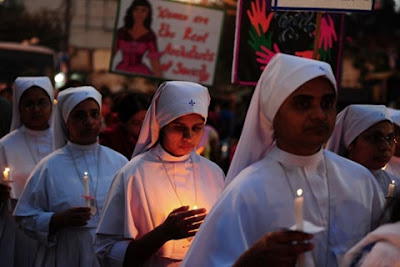 I will divide this essay into three parts:
1. INTRODUCTION
Main points of belief:
Ten Commandments:
Trinity:

Trinity refers to the teaching that the one God comprises of three distinct persons:
Together they are called “Godhead”. Those who agree to three Gods are Trinitarians and others are Non- Trinitarians.

On Sunday, all Christians gather for communal worship to one place – Church. The President reads the writings of prophet till time permits and then all rise together and pray. In the end, the President offers thanksgivings and the people assent saying “Amen”.

It is an outward sign instituted by Christ that conveys spiritual grace. Catholics traditionally accept Baptism and Eucharist as Sacraments, Protestants believe these rites do not communicate grace and they prefer to call them "Ordinances".

It is a ritual act with the use of water for the person admitted to membership of Church.

The Catholic Church comprises of churches headed by bishops in communion with the Pope, the Bishops of Rome as its highest authority in matters of faith, morality and church governance. Catholic theology interprets two senses of scripture Literal and Spiritual. It has more than 1.1 million baptized members.

In 1517 Martin Luther protested against the sale of Indulgences and soon moved to deny several key points of Roman Catholic doctrine and protestant reformation began. They do not agree with "Confessionalism" and/or "Creedalism". Martin Luther, Hul Drych Wingli and John Calvin inaugurated Protestantism. They said and advocated one simple and definite understanding of scripture.

2. Jesus Christ
The saving work of Christ on the cross is often referred to as the Gospel message or good news for the whole world. According to the New Testament - Jesus was crucified, died the physical death and buried within a tomb and rose from the dead on the third day. This shows that Jesus has authority and power over life and death and He can give people Eternal Life. (John - 3:16 NT)

3. The Holy Bible
The survey of Bible is divided into nine parts:
Well, Bible is not only the story of God and His Son Jesus Christ - it is also the story of you and me.
It begins with The Old Testament and ends with The New Testament.

The Old Testament makes to our maturity in Christ--not in details but in orbital view survey.
In the past, God spoke to our forefathers at many times and in various ways, that is Old Testament. And in the last days, He has spoken through His son Jesus Christ and the Holy Spirit and that is New Testament. So the completion of the old is found in the New Testament.

The Old Testament is a primary - preparatory phase of the Bible, just like school-teachers teaching ABCD in the beginning or say farmers are preparing soil adequately before seeds are put in it. Let us say soil of my heart needed the preparation of Old Testament to receive seeds of the New Testament.

The Old Testament has four divisions:
Above details prepare us so we see ourselves clearly and our continual merry-go-round of pleasure-seeking, money-seeking, relationship-seeking or drug-seeking which ends in despair, emptiness, loneliness or addiction stops. Now we know the meaning and purpose of life.


The message is clear: CHRIST IN YOU, THE HOPE OF GLORY.


The contents are as per teachings and guidance of Rev. Dr Cecil Chauhan Bth, Mth, PhD (Bilimora, Gujarat, INDIA)

Before Shirdi, Shivarimal and After Saputara, Shivarimal - Story of a School for Blind Children

We visit Saputara (the only hill station in Gujarat) round the year for pleasure trips. Similarly, the devotees of Sai Baba visit Shirdi frequently. For a change and possibly a better experience, I’d like to suggest you visit Shivarimal (a Free Residential School for Visually Impaired (Blind) and Physically Challenged Children), about 20 km from Saputara and 93 km away from Bilimora on Bilimora-Saputara road. Let me tell you my reasons for details.

My close friend Piyushbhai Dharaiya formed a charitable trust in the name of his wife Late Jyotsanaben and decided to donate the interest away, every year. I suggested him to visit Shivarimal School for Blind Children and experience the emotions of blind students. We finally visited this place on Sunday, February 16th, 2014 and the result is this introductory article.

Three Decades Of My Nomadic Experience

I recently read the novel "Pyramid of Virgin Dreams" by Vipul Mitra. He affectionately described the pains and pleasures of multiple transfers because of his father’s job as DSP and later himself as an IAS officer. While reading it occurred to me, I have had a similar life of changing a place many times nearly every alternate year. So why not narrate my story and the article is here! A nomad means someone who lives by travelling from place to place - moving around all the while. I was a nomad for the initial 28 years of my life, staying and studying at more than 15 places. A year or two and change of the place again!
8 comments
Read More

Have you read Bhagavad Gita - also known as Shrimad Bhagavad Gita? A positive answer is not much awaited and so this article - giving details in a precise and shortest way. Just read every line and try to be with me in this story-telling. I am sure you will end up with great surprises.

The context of the story is a dialogue - conversation, taking place on the battlefield of Kurukshetra war between Lord Krishna (kṛṣṇa) and Pandava prince Arjuna.

To my greatest surprise, one fine morning I received a memento with my name inscribed, in the honour of outstanding academic achievements! Turned out that Pardi Education Society's trustees and event organisers (including the Vice President Hemant J. Desai) had sent this memento as part of the centenary celebrations of my high school D.C.O. (1918-2018). This award depicting the story of grand 100-year celebrations inspired me to write about my story with nostalgic emotions and the then D.C.O. High School. Killa Pardi.

History Of India - For "No Time" Tagged Readers

History is a social science with storytelling.History is discovery, collection and presentation of information about past events with its cause and effect.History is a record of past.Greek word ‘Historia’ means inquiry, judging and knowledge acquired by investigation.For learning history, it is compulsory to understand/know geography, economics and anthropology simultaneously.
Now coming to India, ‘pre-independence’ Indian history had:
1.            Stone age: 30,000 BC to 3300 BC 2.            Bronze age: 3300 BC to 1500 BC 3.            Iron age: 1500 BC onwards.
So here’s the History of India post-1500 BC, within my knowledge and research. The following sections are quite detailed and may appeal more to readers with academic interests. If you belong to the other side, I’d suggest you jump straight to Summary section.

1400 BC to 1300 BC Raja Bharat was ruling India with Hastinapur as capital.
His two sons Pandu having five sons - Pandavas and …
4 comments
Read More