The Tragic Story Of Partition

One of the most important chapters in the Indian history (and equally so for Pakistan) is the partition of the nation in 1947. This article is a review of the book “The Tragic Story Of Partition” by H V Sheshadri. 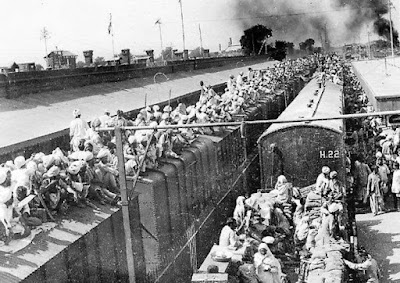 While writing book-review, I have to be sure that I do not rewrite the same book in detail. So my aim will be brief introduction. At the same time, the information about book should be precise and to the point, so the reader understands the subject and desires to read the said book. I will so that.

On 15-August-1947, India was going to be "Independent" from British rule. What events lead to partition of India in two is the subject of this book. Every patriotic and history loving person must read this book.

The author H V Sheshadri took all the pains to go into the details of this history with reference to Shripati Shasri’s (History professor of Pune) lectures in 1972 at Bengaluru – and – he did not hesitate in taking help of reporter K R Malkani, historian Devendra Swarup and others.

I will tell this in three parts:
1. Chronology of event leading to partition:

1857
Freedom Struggle: Hindus and Muslims protested British rule in one voice and started freedom struggle. Here is when British rulers found out the way "DIVIDE AND RULE" policy as the only way out for the continuation of the rule. So they promoted Muslims and gave them a free gift of land captured from Hindus during the said war. (40)

1885
1. Indian National Congress was formed by British Hume for support of British rule. The purpose told was social and political reforms.
2. Christianity: British sent missionaries for conversion of poor, backward, forest residents and Harijans who supported British after conversion to Christianity.
3. English education and forming elite class: Lord Mackole gave special teachings of English to qualify Indians. The ‘English knowing’ new class of people was formed who separated themselves from other Indians to believe them 'elite' class – superior to others. They unknowingly united themselves with English people and supported them.

1888
Anglo-Oriental-Defense Association: Theodor Beck (Principal of Aligarh College) formed this association for Muslims right protection and for getting support to British rule from Muslims.

1899
Indian National Congress at Lucknow annual meeting gave special attractions to Muslims like free tickets for conference, free food, free Muslim traditional dress and Rs. 10 daily allowance at conference to get their support against British and make them loyal to Congress.

1906
1. Viceroy Lord Minto encouraged Muslims against Hindus with the help of Nawab Mohsin-Ul-Mulk of Aligarh.
2. Monte-Minto Law for separate voters council for Muslims and Sikhs to divide them from Hindus. (51)
3. 30-December-1906 Muslim league formed at All Muslim conference held at Dhaka under leadership of Nawab Salimulla Khan and declared Aga Khan as permanent Chairman.

1915
Congress-Muslim league pact on giving separate voting right on the basis of religion to Muslim and Sikh. (71)

1924
Gandhiji supported Muslims for their nature of being attacker and criticized Hindus for their so called inherent cowardness.

1942
Kripps Mission offered conditional and partial Independence with minority having "veto" for saying "NO". It failed.
British-Muslim league and communist axis established. (164)

Why partition of India took place?
Gandhiji told people in general are in favour of partition of India. This was not based on truth or facts. Actually majority of Hindus and Muslims were against partition and were actively opposing it, but he opted to ignore. (213)

Indian National Congress, not only agreed to partition but it did not oppose on any point put forward. (213)

Neither British nor Muslim League was strong enough to force Congress to accept partition.
Simply, if Congress would have stuck to demand of "United India", nobody could have succeeded. (257)

This is the most important interpretation...


The only reason for partition was Congress – few Congress leaders who were old, tired, not ready to fight any more and having political desire of getting power at the earliest. All this made them accept partition without much protest and fight. (274)


This demands youth to join politics, instead of living it in the hands of tired, frustrated and idle old.

Examples in the History of all the divided nations trying and on the way to success are following:
Reasons:
Well, all we need is intense and sincere desire leading to try for union.

My Books - My Treasure

During a candid chat with Prof. Dr Ashwin Desai in Surat one fine day, he asked me about the list of books I possess and I had no answer! I thought why not prepare an inventory, along with an article containing a brief description and their photographs.
I also happened to read an article in Reader’s Digest around the same time about the set of books the lady author owned. She advised to keep books around - within reach and there were chances of your reading the book. She advocated to keep on purchasing the books, so that one day you may come out reading the precious collection you have already purchased at a sky-high expense. Let me describe them and I wish photos speak more.


Although it is routine to give references, in the end, I shall start with the list of three reference books in the beginning. All these details are not mine, I’ve only summarized them from these books.

Should You Visit The Taj Mahal?

Should I at all visit 'the Taj' the Taj Mahal?

Yes, it is a must, because we have the world’s best wonder (The best of seven wonders of the world) and nothing should stop you from visiting it. Let me tell what others say about Taj.

What do visitors say?