We planned a week’s visit to an old-age home in Lonavala, in a group of ten from Bilimora between 7 and 14-Mar-2019. Dr. Pravin Gilitwala led the team and organised because he had been there numerous times. Dr. Bhavana Desai (my wife) and I were little uncertain about the venue and timetable there but agreed just to have a new experience altogether. To our surprise, everything turned out to be better than all we thought. We had a great time all in all!

Just by the old Mumbai-Pune highway is situated this old-age home for fixed one week stay. Only old-age people above 60 years are invited to stay for a week starting every Thursday and ending the next Thursday, in a total number of hundred. There are AC and non-AC rooms available for fixed one week, at different rates. These are twin-sharing rooms charged at is Rs. 6,000 and Rs. 12,000 per week, based on individual preferences. The rooms are like single bedroom apartments with four beds, dining table and kitchen having LPG gas connection and utensils for cooking, serving and eating. The bathroom and lavatory were separate, with the well-set bathroom having hot-cold water and shower (and also the western type commode aptly preferred by the elderly). The television or music systems were purposefully excluded. There is an intercom telephone connecting every room to the office, room service and other rooms. The housekeeping staff clean the room and utensils and also wash clothes every day. 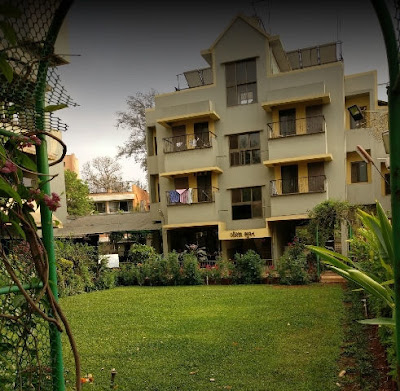 There is a hall with a sound system and big screen television for daily gatherings, a well-maintained garden with swings and chairs, a joggers’ track and a temple for daily prayers from 7:00 PM to 8:00 PM. Smt. Kala Doshi was in charge of prayer session ready with Aarti, Bhajans, other prayers and songs. The added attraction of this meeting was the birthday and wedding anniversary celebration. Our friend Bharti Trivedi singing Bhajans, Ghazals and songs with harmonium was the best of all. Wedding anniversary celebration of three couples was held on Wednesday (13-Mar-2019) following prayers. Dr. Bhavana Desai and I, Mr. Indravadan Mehta and one more couple had their wedding anniversary. Smt. Kala and all others sang Lagna Geeto (wedding songs) for us. All were happy and a bit emotional. We threw an ice cream party to all present there.

I must admit, meeting Antubhai reminded me of my father. He had just a similar look and mannerism. I would feel how a father-son bonded and had an emotional outburst. You do not know how people can be that good and kind to any unknown.

During 9:00 to 10:00 PM every evening, most of us used to gather in the hall to enjoy a musical feast served by our inmates Sharad Parekh (USA), Chandresh Trivedi (Ahmedabad), Dr. Bhavana Desai (Bilimora) and Varsha Gandhi (Mumbai). All four sang songs - Sharadbhai sang all the songs as a solo artist, Chandreshbhai as a performer with Karaoke music in the background, Dr. Bhavana Desai sang songs of her choice and as a partner in duets and Varshaben sang Bhajans, Garaba and songs of her choice. The excitement heightened when Garaba, musical chair and Antakshari also got added. Before calling the night at 10:00 PM., we had a fun-packed evening!

We the ten from Bilimora used to gather in one of the rooms every night, to chitchat and enjoy the light mood of joking till sleep forced, even till 1:00 AM! A laugh was the only end result of whatever we talked. According to mood, at least five-six of us met regularly.

The breakfast typically contained Upma, Uttapa, Poha, Wada, Idli, Sambhar and similar. The food was always warm and fresh. They used to write the daily menu on the whiteboard.

The lunch included a sweet, Puran Poli, only on Sunday. Everyday morning menu contained a Farshan in addition to Daal - Rice, vegetables with cereals and Roti. Evening menu also had a variety of dishes like Bhel, Panipuri, Khichdi-Kadhi, Dal Dhokali and what not. Eight days of meal expenses barely charged Rs. 1,800 per person. The manners of staff in the dining hall were pleasing, welcoming and respecting to each one of us. Well, I have never seen such well-behaved staff in many places.

Our Itinerary of Old-age Home Stay


Kapol Sanatorium, Lonavala is active because of three persons staying there. Chairman Pravin Dalal, Ex-trustee and full-time in-charge Antubhai alias Anant Doshi (85) and his wife Kalaben (84). In spite of age, they are active, involved, interested and get everything done for the ease and pleasure of inmate guests.

We were a group of 63 (Sixty Three) this week. The first reaction on entering and seeing the crowd of old (really old) and a bit-debilitated guest was negative. I remembered the old-age homes I had seen and wondered how I would ever pass seven days of a week. I would console myself by reminding that I at least had nine others with me – my wife, Dr. Pravinbhai and Naliniben with his brother Devendrabhai, Prof. Vasantbhai Mujadia with his wife Minaben, Prof. Minuben, Shri Piyushbhai Dharaiya and last but not the least Bharatiben Trivedi. The beginning proved to turn wrong and later nearly all 63 became very close - turning into our brothers, sisters, mothers or fathers.

The majority of the senior citizens were mainly from Mumbai and Kapols, others were from Bilimora, Rajkot, Gandhinagar, Pune and the USA, got attached with many in a short duration. Let me narrate my attachment with them.

Champak Shah looks just like my late Ishwar Masaji - so I took his photos from all angles. I felt if he was another Ishwarbhai. To talk about this, I visited his room and we had a heart-to-heart talk. The tie of relations developed will last long. Jayendra Padia from Rajkot was single here. Since he is from the Sales Tax Department, we had lots to talk about and also referred to my relative Ketanbhai Desai who retired from the same department recently. He has written many books on Sales Tax.

Varshaben Gandhi and her husband were very open to all of us. She told about her bad experience of sonography. Being a singer, Garaba player and a light-minded lady, our association reached a great height. Indravadan Mehta shared their wedding anniversary with us – he has visited this place frequently for the last twenty years.

I must say the most active amongst all was Sharadbhai Parekh from the USA. He sang filmy songs, Gujarati songs and Garaba every day. 97 years old Gangadas Gandhi was active, interested and participated in all the activities. The youngest (58) was Minuben Mujadia (Bilimora) - a jolly, enjoying and expressing like an innocent child. Maybe she was the best in the group.

My daughter Vaishali managed to visit us for one day and found out how the stay was.

Summary of the experience is good. Yes, for a change once in a while, this is a great stay. Yes, old-age homes stay (if compulsion forces) can be joyous and good if the crowd around is positive, well-dressed and enjoying. Hope nobody needs such a stay by compulsion till death, but if so happens, better learn to enjoy the life there instead of cursing – criticising all concerned. My wife Bhavana had a great pleasure being an artist singing songs every day, performing Garaba and leading event of musical-chair game and Antakshari. I too felt great all the while being with people respecting both of us.

Yes, stay in old-age home is worth trying.