January 08, 2018
25-Dec-2017 onwards, I had talked with my friend Anilbhai Desai on phone two-three times. Every time, he mentioned the worthiness of seeing Kankaria Carnival and invited us. But I was resistant to go. On 30-Dec-2017, while talking with Jayshreeben Desai, she also invited and insisted to visit Ahmedabad. So, my wife Bhavana and I accepted the invitation. In fact, when we need to face young generation people, we avoid out of fear of difference and generation gap. Even visiting close relatives and friends is not that pleasing nowadays, and so we avoid as far as possible. I had sufficiently interacted with Anilbhai's son – Darshan and his wife Shalu, so I could be little courageous to decide for the visit. 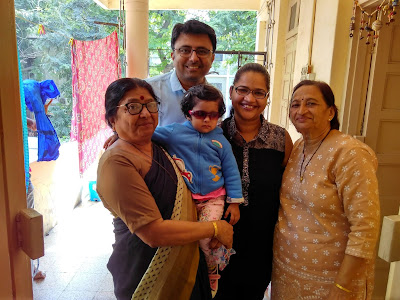 Surprisingly and to my pleasure, I was right. When we reached Ahmedabad by Gujarat Queen on 31-Dec-2017, Anilbhai and Darshan welcomed us at the railway station and drove to their home near Kankaria Lake Gate No. 3. We had planned for only one day programme, but Darshan insisted to stay for one more day to visit the flower show at Sabarmati riverfront. His welcome and consistent force made us accept the one-day extension. He made Railway ticket reservation for the return ticket.

Well, we were more than happiest staying with them for nearly 36 hours. All the time, they accompanied us and looked after us. I no longer have any regrets about being with the young generation. We felt how they were so good at heart and did have great respect as well. We were going to face many surprises. Let me start.

On reaching, we were offered slippers and napkins to be kept till stay. They offered us a separate bedroom and they (five) stayed in a single room to accommodate us. On both the days, different breakfasts like aloo poha, upma and snacks were offered with tea not regularly seen at all places.

During late evening hours, four of us - Anilbhai, Darshan, Subodhbhai (Anilbhai's brother-in-law) and myself, sat with different drinks, mocktails, munching and dinner. We had lot many open heart talks, starting from timepass to ‘heart to heart’ dialogues. The meeting concluded when the clock bell rang at midnight. We dropped Subodhbhai at his residence.

Next day morning, Bhartiben (Anilbhai’s sister) took all the pains to visit us and meet us during our stay.

We visited the festival Kankaria Carnival with Anilbhai and Jayshreeben. We had to stand in the queue for nearly 45 minutes to enter through one of the seven gates. Kankaria Lake and its central island Naginawadi were decorated with multiple colourful lights. Stages of the music and entertainment shows were set in three places. And the most important was the laser light show being shown constantly with multiple designs and colours. Such programmes were planned for seven days of the last week of the year. Everything was worth seeing and enjoying, except the overcrowding.

At Sabarmati Riverfront, around two-kilometre long flower show was organised for ten days. Here, all the types of flowers were exhibited making a great scene with different floral pieces showing giraffe, horse, sheep, etc. animals, sparrow, butterfly and other birds and a Barbie doll. Only seeing is believing. All were busy seeing, enjoying the sight and taking photos and videos of the memorable show. Food court, sets of greenhouse effects, shops selling all of the flowers (seeds, fertilisers, plants and accessories) were also worth seeing.

After seeing the flower show, we seven had a lunch near Vadilal Hospital. Following lunch, we said goodbye to all concluding the trip. Shalu arranged for the cab and paid the amount by Paytm. Last of her hostship was the return-gift of dates and coconut sweets and packed dinner for the two of us.


Well, meeting this generation and staying together was a great success. I think it is worth trying to experience how young generation cares, respects and welcomes being with them.