June 29, 2015
Generally, the wedding of a daughter is event parents plan from the day of her birth. They start saving money and dream about the son-in-law to be. But all these have one condition tagged – “Consent of Parents”. Or say a final decision has to be with and as per the will of the parents. When this does not happen and daughter decides to marry at her own will – against the consent of parents, they get shocked emotionally to its deepest level and this is the subject of my discussion. 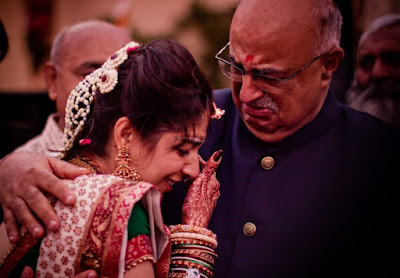 New generation kids – boys and girls included – are exposed to modern gadgets and technologies like mobile, internet, Facebook, WhatsApp and satellite television. This has made them extraordinary clever. Their intelligence is sky-touching high compared to their parents. This leads to thinking the parents to be less intelligent and offspring starts taking parents as near idiot.

Secondly, many parents have only one child to take care of – two children parents are still luckier. Being the only child, the parents want to bring the child up in the best possible way. They want, all whatever the child asks to be done whether worth or not, whether they can afford or not. The child starts to learn to get whatever she desires – be it a mobile, bicycle, two wheeler or a husband. She cannot accept any denial now.

Early sexual ambitions, because of exposure to adult movies with explosive sex matter or even pornographic movies online demands early physical relations. The ambitious, well cultured and intelligent boy would ideally not indulge himself in such activities. So whosoever asks for or agrees for physical relation becomes her life partner. Maybe she does not realize this before marriage. And a mistake of marriage is committed at the earliest legal date of 18th birthday.

A daughter, being a single child, having the highest intelligence and habit of getting whatever she decides, starts thinking that being right or wrong is out of the question. And that leads her to decide to marry a person who may or may not be the right-fit according to her parents. Their reason may be the prospect of being of another caste, having poor look, less qualified, unable to earn a livelihood or a mismatch for any other reason.

Nowadays, modernisation demands to have a close friend of other sex as a must. The girl without a boyfriend often feels herself inferior and gets ready to label any person who offers close friendship as a boyfriend, probably leading to pair for marriage. And the daughter gets married against the parents’ will – against the parents’ refusal to marry.

How do parents react to such a marriage?

Parents are usually the last to know about the marriage of their daughter. When they know about the event, they tend to react very severely. They take this as the greatest shock of their life and get depressed to the maximum. Most of the time parents react with great emotional outburst leading to a psychological setback. Many times, they consider it as a great asocial activity occurring at their own home. They stop meeting people, hide, and try to keep this news as confidential as possible for the longest possible time, fearing the social insult they may face.

They become:
- silent and speechless,
- start weeping and
- even crying for days and months.

They become:
- sleepless,
- worrying,
- loose hunger and
- even stop their profession.

An acute emotional disturbance is expressed as depression. The so-called (may not be in reality) close friends and relatives start visiting the parents to console for the sorry event! They disturb the parents more and parents react and behave in an imprudent - unnatural way. They lose the contact of their daughter or meet her just to scold her in an unexpected way of insulting words and sometimes beat her.

Parents describe the now son-in-law as:

- characterless,
- unqualified,
- having a very poor look,
- having poverty or low income,
- tells his parents to be very poor,
- low moral type and characterless and what not.

They decide to sell their present house if she stays nearby after marriage.

- Prepare a fresh will (about their property) deleting her name as beneficiary.
- Give advertisement in local newspaper informing about having no relations with her.
- Sometimes they even tell friends “I am glad that the expense for her marriage is saved.”
- Few parents do not stop here, they frighten the couple and send a message of threat regarding physical assault and even killing them.
- There must be many other different reactions. Please share them in your response.

The relations starting with total negativity does not remain so in most of the cases. And the compromise – settlement leads to normalisation of relationships with love and respect in as less as six months to a few years. That is better and worth welcome. The daughter is never forgotten or cut off whatever the parents tell initially in shock of her marriage and caring for relationships with her is bound to follow.

I would like to conclude with a few suggestions.

- Don’t overreact hastily initially and spread bad word about the daughter and son-in-law.
- Instead, just relax wait for a while.
- Keep silence and think positively about what can be done.
- No, don’t be sorry.
- Let the time pass – days, weeks and a month at maximum. It is said, time is the cure of all sorrows.

Be with your daughter

Tell her your views regarding your objection, dislikes and whatever you feel but without anger, without social fear or ego. Just keep in touch with her in any way you like on phone, mobile or personally. Don’t behave as an enemy of your daughter. A single mistake does not mean the end of your relations as daughter-parents.

It is an issue to be handled between you – the parents and your own daughter. Wait, think – be slow and the end is certainly good. Do not take the advice of friends, relatives, or lawyers. Just tell them how you feel and do not be directed by their suggestions. Only you have the answer to all your queries with the daughter.

My best wishes and blessings are always for all of the parents and the newlywed daughter couple because the best is yet to come.